Was bored the other day so decided to take my hash rosin and deconstruct it..

Those are some chunkers for sure...holy big diamonds bro....nice.
Getting ready to do this. Just got a heat mat. Will be pressing some of my Glue run into a jar and going for the diamonds...so cool!!
Peace, negative.

Ok color me impressed!!!! Solventless diamonds and sauce made from rosin! I used to frequent future4200 and I was following the tech closely but that’s been almost 2 years ago. Anybody got a good link on that tech? I will be selling my closed loop butane rig if I can make stuff like that from Rosin! I guess I need a Rosin press!
D

ICETOKER said:
Was bored the other day so decided to take my hash rosin and deconstruct it..

its looking nice. did you go for the jar-tech? if so, do you have any tips about how long in the oven and how hot? it doesnt look like cold cured tough. have a nice one

What do you gain by doing this for real (what does it actually do better then any other way) is it just that much more cleaner this way or just simply super cool ?...
Last edited: Oct 21, 2021

I was shocked on the old overgrow at how a lot samples come back, surprisingly shocked for the better, Evan that rozin tane (WOW) i can not believe people used that) it wouldn't even kill ya lol lol lol.

I miss Zippy he had a propane recovery deal that was simply cool to look at...
Last edited: Oct 21, 2021

I still run the same BHO setup HMK showed me, i used to run the alcohol tar before i stepped up to the tane, My lung's get x rayed a lot and i know without a doubt that my tane oil can shrink nodes when i go to town on them, and also no (I hate the word) returned for just over three years now... I had it in other spots, not my lungs...

how did you deconstruct it? in the rosin press by seperating the terpenes and the thcA cristals or with the jar-tech?

I've been doing a bit of research on it, you need really good rosin to start with, for example OP pressed hash and then pressed that rosin, low and slow, and then lower and slower, press good quality hash like 70 micron ice water or sift at 160 and bring it to 500-700psi for 60 seconds, collect it and press again at 100 even slower to 1500-2000psi for 60 seconds, what presses out onto the parchment is the sauce and what's left in the bag is the crystals which will be a powder, collect the crystals and heat them at 250 until melted into a puddle and clear/no longer waxy looking, then let cool to break up and combine with the sauce

there is jar tech which involves collecting it all in a jar after the initial hash press and keeping the jar sealed at 80-90 degrees for a week or longer, but if the rosin isn't very terp heavy it won't separate good this way and sometimes will just make sugar jam instead of crashing big diamonds
Last edited: Dec 15, 2021

THC Diamonds........Romulan is the strain 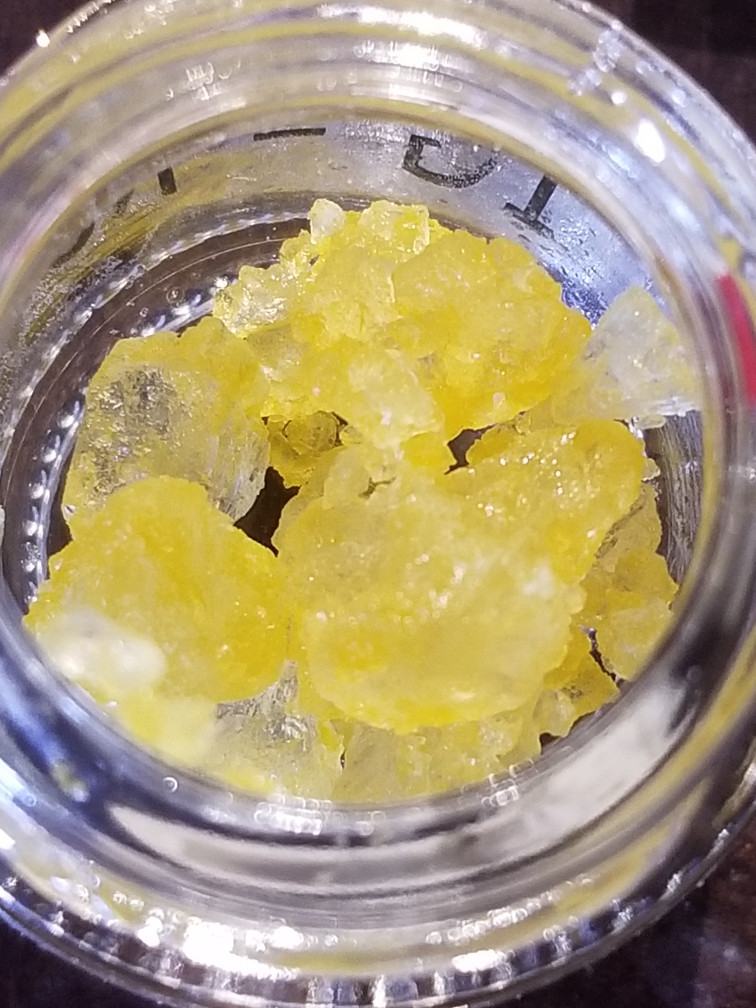 personally I wouldn't separate it, in my experience badders always dab better, diamonds seem to need a bit hotter temp than the sauce and the sauce either gets dabbed too hot or there ends up a little puddle of melted diamonds leftover
B

ICETOKER said:
Was bored the other day so decided to take my hash rosin and deconstruct it..