Mentor
Phytophthora, “the plant-destroyer” is a genus of plant-damaging Oomycetes (water molds), whose member species are capable of causing enormous economic losses on crops worldwide, as well as environmental damage in natural ecosystems. The genus was first described by Heinrich Anton de Bary in 1875. Approximately 100 species have been described, although 100-500 undiscovered Phytophthora species are estimated to exist

In the early stages of disease, symptoms consist of retarded growth, slight drooping of the foliage and off-color foliage. Infected broadleaf species wilt during the heat of the day (Fig. 1) and recover at night. Roots become discolored and die (Fig. 2). Dark or reddish brown discoloration may extend up into the wood of the lower stem (Fig. 3). Severely affected plants wilt permanently and turn brown.

pic 1. Wilting of susceptible plants in the field. (Photo by R. C. Lambe)

pic 3. Fig. 3. Internal discoloration of the wood in the stem near the ground line following root infection. (Photo by M. A. Hansen)

Disease development is favored by high soil moisture and soil temperatures of 80°F and above. Infected plants growing on sandy soils are generally not as seriously affected by the disease, whereas those growing on poorly drained soils wilt and die. On well-drained soils, only feeder rootlets are rotted, but when drainage is poor, the main roots and stem become discolored and infected plants wilt and die. Many areas of Virginia have soil that is heavy in clay, poorly drained, and conducive to Phytophthora root rot. Infected plants may also be brought into Virginia from other states. These plants may appear healthy when received, but wilt from root rot when exposed to local conditions of high soil moisture and high temperatures. Plants with root systems impaired by Phytophthora root rot may also be more sensitive to subsequent periods of drought.
Losses from Phytophthora root rot in commercial operations have decreased due to the increased use of well draining mixes, such as 100% pine bark. In general, root rot occurs less frequently on plants grown in mixtures that have an air volume of 20-25%.

Chemical control of Phytophthora root rot in established plantings of rhododendrons and azaleas is difficult. However, the spread of the fungus from diseased plants to adjacent healthy plants may be checked by drenching soil around the healthy plants with a fungicide containing mefenoxam (e.g. Subdue MAXX), metalaxyl (e.g. Subdue), fosetyl-Al (e.g. Aliette), etridiazole (e.g. Truban) or etridiazole + thiophanate methyl (e.g. Banrot). Follow label rates and treat at four-week intervals during the summer when environmental conditions are favorable for disease. For further details on chemical control, consult the current Virginia Pest Management Guide for Home Grounds and Animals (VCE Publication 456-018) or the Virginia Pest Management Guide for Horticultural and Forest Crops (VCE Publication 456-017), http://pubs.ext.vt.edu/456/456-017/456-017.html. For information on the proper use of pesticides and fungicides, refer to any current VCE pest management guide.
In locations where plants have died from Phytophthora root rot in the home landscape, it would be advisable to replant with a cultivar that has resistance to the disease. A list of cultivars of azalea and rhododendron that are reported to have moderate to excellent resistance to Phytophthora root rot is provided below.
Propagation

Before sticking a new crop of cuttings, remove old rooting media from the propagating benches. To reduce the possibility of pathogen infestations originating from soil on the floor of the greenhouse, propagate on raised benches. Flats, baskets, and greenhouse benches can be treated with a disinfectant, such as Greenshield or Physan 2.0, to eradicate plant pathogens from surfaces. Propagating tools should be steam-sterilized or soaked in a commercial disinfectant. If a commercial disinfectant is not available, use household bleach containing sodium hypochlorite (1 part bleach to 9 parts water). Propagating benches should also be surface-sterilized between each set of cuttings prior to filling with sterile rooting media. Containers

Containers should be placed on well drained sites, preferably on rock or gravel, so that any surface water contaminated with Phytophthora zoospores, which are motile in water, cannot enter the container through the bottom. Growing areas can be crowned to facilitate rapid runoff of water. If the water used for irrigation of containers is recycled, the hazard exists that the water may become contaminated with zoospores of Phytophthora spp. Chlorination will eliminate pathogens from the water.

Root rots caused by water molds are very destructive disease of fruit and vegetables. Phytophthora spp. are fungi-like organisms that survive as resistant oospores (persistent resting spores) in soil for long periods or as mycelium (mold) in recently infected plant debris. During favourable conditions, the mycelium and oospores produce a structure called a sporangium. Under moist but not wet conditions, roots can become infected if they come in contact with the sporangium. However, when soils become wet or flooded, sporangium produce and release many mobile zoospores that swim toward and infect the root tips of berry plants. This is why plants growing in poorly drained, heavy, wet soils are at more risk of becoming infected by Phytophthora spp.
Managing root disease caused by Phytophthora requires an integrated approach including good site selection, growing resistant or tolerant cultivars, planting in raised beds, planting disease free nursery stock or transplants and applying a registered fungicide when necessary. Aliette WDG (Fosetyl-Al) and Ridomil Gold 480 EC (metalaxyl-M) are two very effective fungicides registered in Ontario for diseases caused by Pythium spp. and Phytophthora spp. such as red stele in strawberries and Phytophthora root rot control in raspberries, blueberries and fruit trees. Although both fungicides are effective against root diseases caused by Phyphthora spp., they are very different in the way they control these pathogenic fungi and the way they move in plants.
Ridomil was originally targeted to protect crops from foliar diseases; however it is now widely used for controlling many soilborne diseases as well. Ridomil Gold 480 EC acts on susceptible fungi by inhibiting RNA synthesis. The end result is that Ridomil Gold 480 EC interferes with the development and germination of Phytophthora spp..
Ridomil Gold 480 EC is very soluble in water and moves systemically up from roots into stems and then leaves with the transpiration stream of plants. There is very little downward movement in plants and therefore it is important to apply this fungicide as a soil drench for best results against Phytophthora root diseases. Ridomil Gold 480 EC can be applied as a soil drench in the fall and the spring of strawberries, raspberries and non-bearing apple tree. In fact fall is the best time to apply Ridomil Gold 480 EC to control Red stele in strawberries and Phytophthora root rot in raspberries. It can also be applied in the spring to high bush blueberries. Pay close attention to application timing and always read and follow the label. Ridomil Gold 480 EC should not be applied in the spring to bearing strawberries, raspberries or fruit trees.
Aliette WDG, a phosphonate type of fungicide, on the other hand is one of the first fungicides developed that can move both up and down in plants. On berries Aliette is only registered for foliar applications. Aliette can be used as a drench to prevent Phytophthora root and collar rot on non-bearing apple trees at planting; however, only foliar applications on bearing apple trees is permitted. Once inside the plant, the active ingredient fosetyl-al is broken down rapidly into phosphorous acid, which is extremely soluble in water and toxic to many Phytophthora species. Aliette works in two ways. It acts directly on the invading pathogens to stop their growth and sporangia or spore sack production. It also acts indirectly by stimulating the plant to activate its own defense system, thus helping preventing future infections from taking place. Plants that have their defense system already activated prior to invasion by a pathogen can defend much more effectively than plants that do not have their defense system pre-activated.
Aliette should be applied when conditions favour infection and disease development and before infection takes place, in spring or early fall. Do not apply Aliette to bearing apple trees closer than 30 days before harvest. Aliette can be applied twice in the spring and twice in the fall to strawberries to control red stele. For the control of Phytophthora root rot in red and black raspberries, Aliette can be applied early spring at bud break and late fall. A second application should be made 3 to 4 weeks after the first. However, if making applications in the fall, be sure the last application is made at least 30 days prior to leaf drop to allow the product to convert to the active phosphorous acid and move to the roots. In the spring, be sure to apply Aliette within 60 days of harvest. A maximum of four applications per season, 2 in the spring and 2 in the fall are allowed. Aliette can be applied as a foliar spray on a 14 -21 day schedule to blueberries starting when there is 7 cm of new growth to control Phytophthora root rot with a maximum of 4 applications per season and a 1 day to harvest interval. Always read and follow the instructions on the label.
Regardless of the way these two effective fungicides work, these fungicides should never be used exclusively to control either red stele in strawberries or Phytophthora root rot in raspberries, blueberries or apples. Ridomil Gold 480 EC and Aliette should be alternated with each other and be included as part of an integrated disease management system to reduce the
potential of resistance developing. 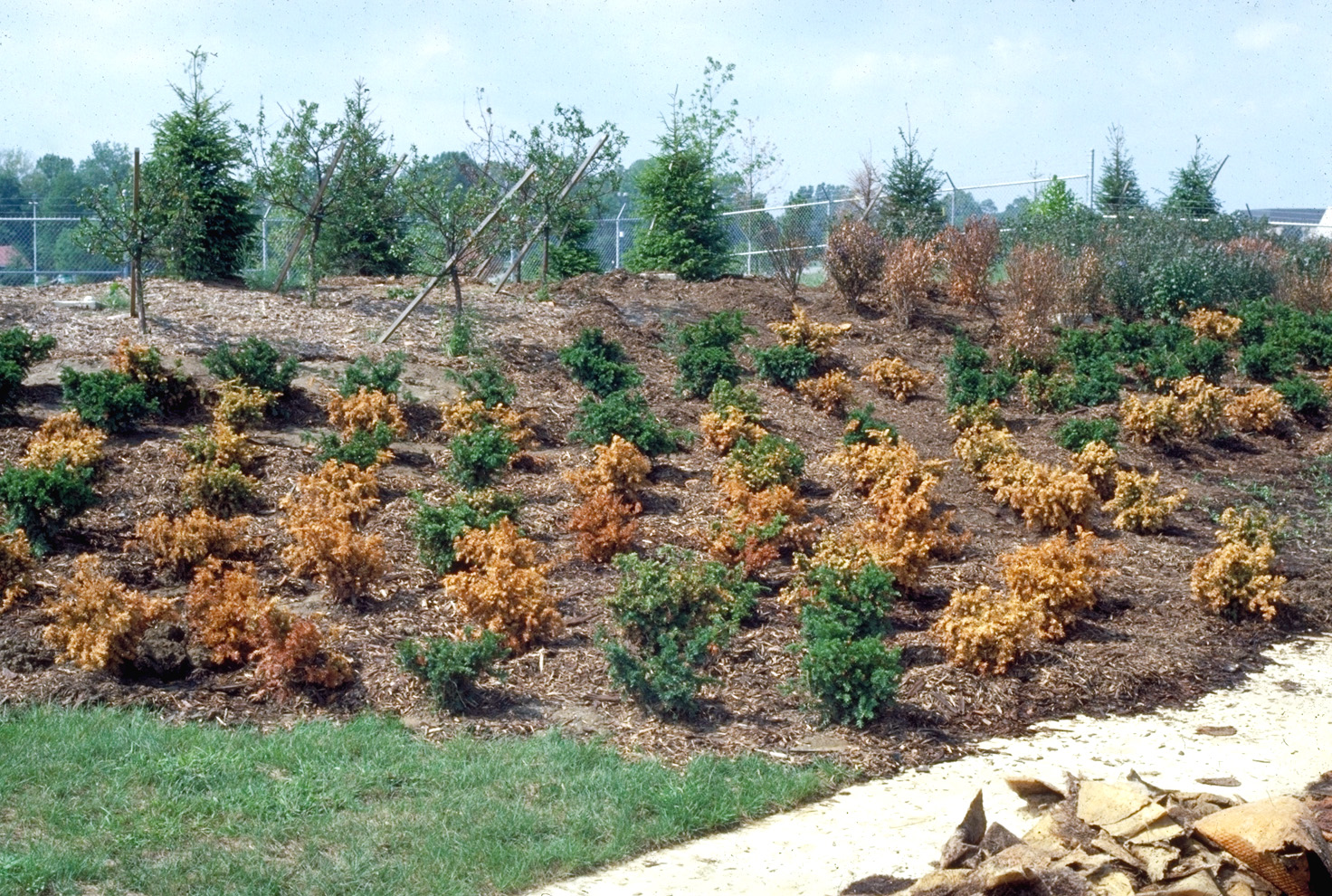 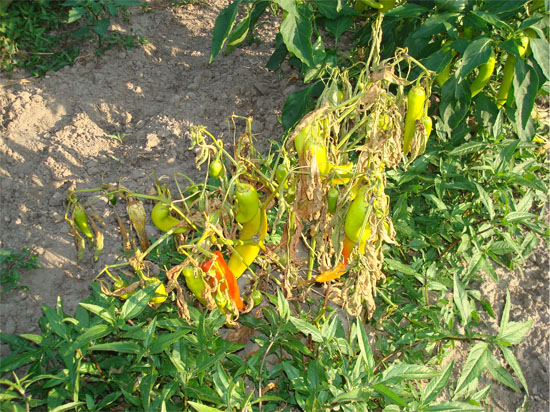 Very interesting.... i've had some plant disorder for about a year that resembles a mild case of that. No wilting, but leaf loss looks very similar to the pics above, and certain plants break branches in veg from the central stalk like tahoe og...