TexasTea said:
I came outside the other day and she must have gotten fried in the recent hot spell. Oh well, I have others going outside this summer...
Click to expand...

I fried a tender clone in the sun this year!

They look perfect for chop chop from here!

Thanks for giving a try to the regular version of this limited edition, we have enjoyed several reports of the fem version, it's great to see the regular one doing so well!
Congrats on the harvest

thank you! is the fem version ever returning? I’m very happy with the regular though because I absolutely love this smoke.

I only popped two seeds and got one male, which I still am keeping a clone of for when I grow out the rest of the pack. The female was simple to grow. easy to control the stretch with a smaller pot but when I flowered a clone in a larger pot it did get tall but still manageable. I couldn’t believe how fast it finished under 11/13. I really liked the look of the plant with the leaves changing color. The buds are wonderful. Very resinous and solid but at the same time fluffy not dense. If you squeeze it it’s not hard, it squishes but it’s super sticky. The smell of the buds is fantastic. Initially a powerful very nice lemon floral smell that’s now become more complicated and less obviously lemon.

The quality of this high is off the charts for me and the potency is very good too. I can smoke this all day it’s so nice. it’s very cerebral but without any anxiety whatsoever. It’s not a motivational or energetic smoke, it’s not especially warm or social, and it’s not trippy but it helps your mood and is very conducive for creativity and just fixes your brain. The high is so pleasant. It goes incredibly well with hiking and people watching and nature and the daytime and music and thinking. it has a nice potency too and the high lasts a long time if you let it. Smoking more gets you higher, which is always a good sign. There is a comedown, especially if you smoke a lot. I will say it required time before the high coalesced; testers and even buds early during the curing had a weak seeming buzz, even more than most plants but it just needed some time.

I will definitely be growing out the rest and making seeds. Dubi do you have any advice for selecting males from this cross? Thank you!

Vendor
So glad to hear it bluesat really beautiful expression and buds, with the reddish-purple Panama fade, and the whitish very resinous New Malawi Killer style of buds. If you like her effects so much and she performs well indoors (regarding vigor, yield, flowering time, easiness of cultivation, etc ...) then you definitely have a winner there worth to keep !

Yes, we expect to bring back Panama x Malawi fem limited edition in stock around early next year. And regarding your question for selection of males of this F1 hybrid, long story short: select smelly, resinous, vigorous and high yielding ones that remind you your favorite female expressions.

hello. the big ones in the background are panama x malawi. central zone of Mexico, subtropical latitude, subhumid temperate climate of altitude (1700 meters above sea level).

the stretch has been very long, the plants have become gargantuan beasts of more than two meters, but in particular the one on the left measures more than three meters, I had to train it because it was already touching the roof of the provisional greenhouse that I had to assemble by discretion and rain. This particular plant seems to have a longer stretch than her sister already starting to form more structured colas.

My "mistake" was underestimating the light sensitivity of this tropical plant. I gave them a month of growth indoors and placed them in the raised bed outdoors in April. here we only have about 30 minutes of difference in the 12/12 around the year, but those 15-30 minutes were enough for me to have a gigantic stretch, normally even sativas flower quite quickly if you only leave them outside for a few weeks, we'll go further 11 weeks and still in what looks like pre-flowering. I suppose that in autumn-winter I will have a giant harvest hahaha. In the plant on the right, the trichomes and tarpenes can already be perceived. I find a certain smell of jasmine flower? less hashy in smell than panama x Bangi Haze


As a reference, the small ones are zamaldelicas in their first month of flowering, and they seem to be in the same stage as the giant ones.

Greetings and the best to all. 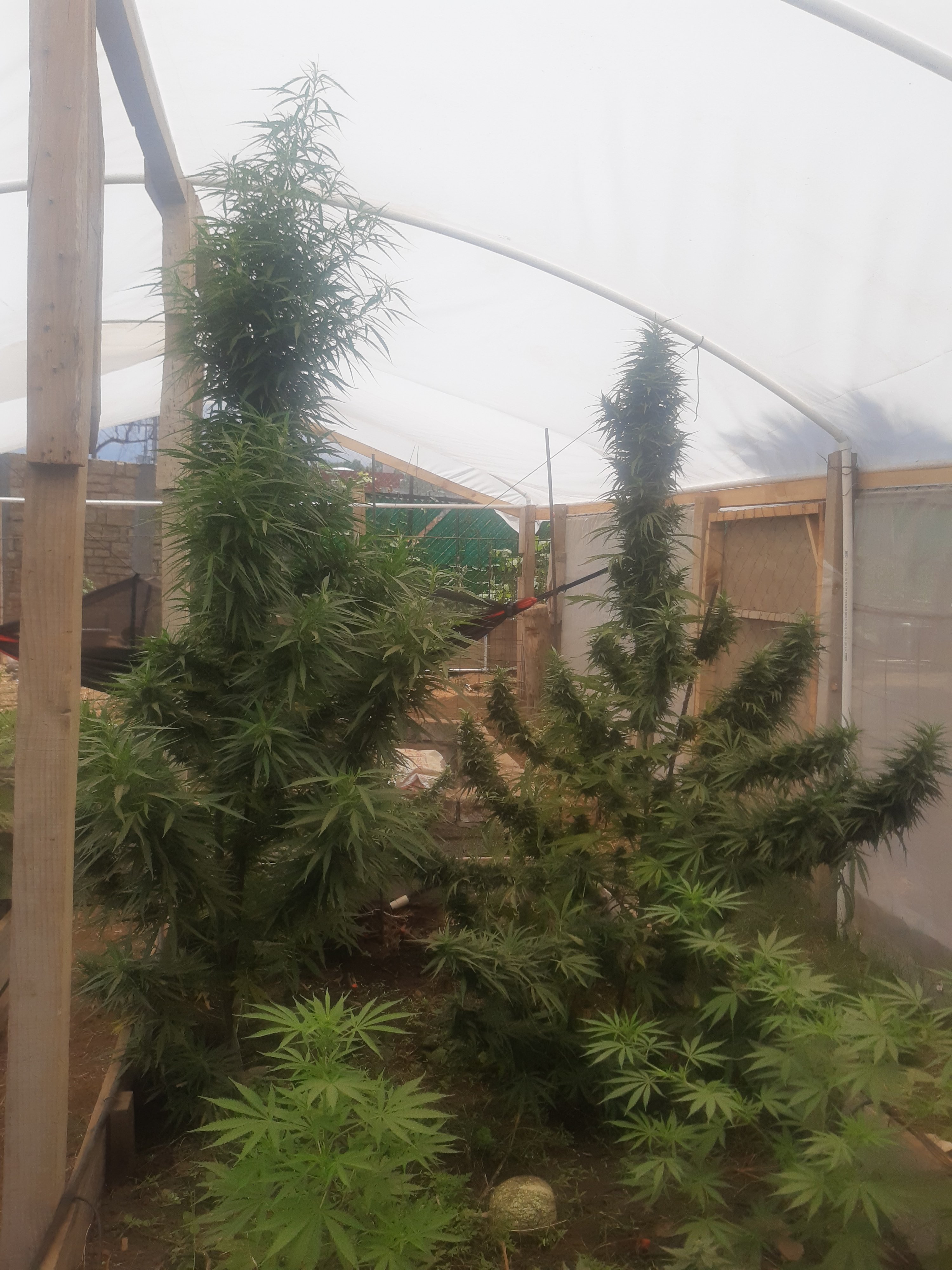 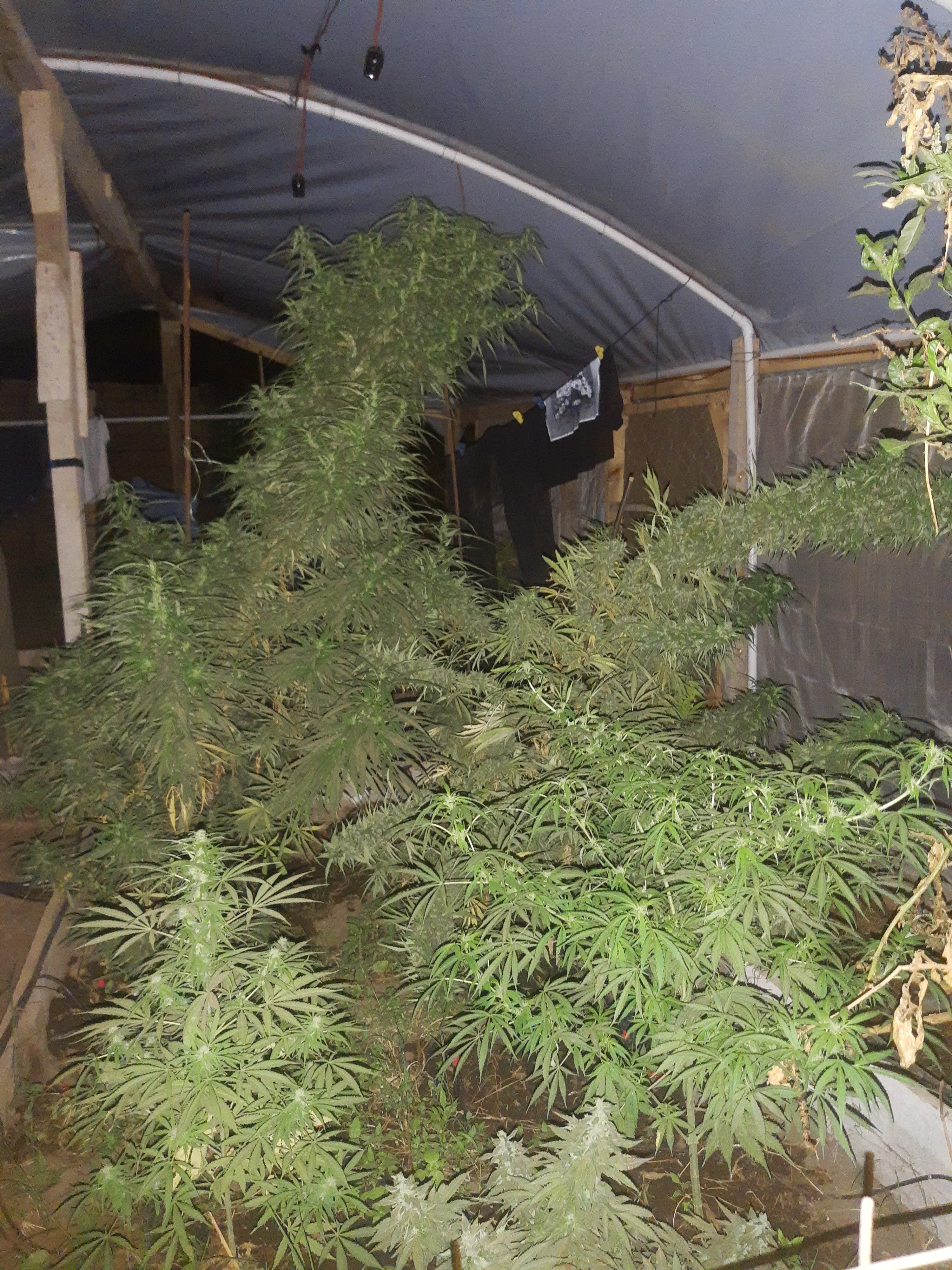 Vendor
Hi OntologicalTurn as we commented (i think) in other thread, they revegged under increasing photoperiod over 12/12. Now after summer solstice with a decreasing photoperiod they will start to want to flower again. You still can expect a few weeks more of strong growth. Since you have horizontal space available, try to horizontally bend down the upper part of the bigger Panama x Malawi to avoid it touches the roof of the greenhouse.

Oh, you have your own zoo.

Mitsuharu said:
Oh, you have your own zoo.

That's a really nice variety of plants.
Click to expand...

LOL Yes. I am trying to find a sativa that suits my needs, I have a form of autism and am struggling with clinical depression. I know that this plant exists and it is not a nostalgic myth because around 2013-14 I planted a plant with those characteristics, I think it was a doctor grinspoon from barneys farm, with what we know in Spanish forums as "fenotrigo", a mutation with spike shape, individual calyxes on very thin branches, the production was quite poor, no density due to the characteristics of the plant, but the effect was something else, at that time it did not clone, so it was crossed with a lanrace male of the variety that in Mexico we call "lime green" (Verdelimón) , gis offspring were also very good, but due to the characteristics of the male he tended to hermaphrodism, and I lost them.
Last edited: Jul 3, 2022

dubi said:
Hi OntologicalTurn as we commented (i think) in other thread, they revegged under increasing photoperiod over 12/12. Now after summer solstice with a decreasing photoperiod they will start to want to flower again. You still can expect a few weeks more of strong growth. Since you have horizontal space available, try to horizontally bend down the upper part of the bigger Panama x Malawi to avoid it touches the roof of the greenhouse.
Click to expand...

dubi said:
Hi OntologicalTurn as we commented (i think) in other thread, they revegged under increasing photoperiod over 12/12. Now after summer solstice with a decreasing photoperiod they will start to want to flower again. You still can expect a few weeks more of strong growth. Since you have horizontal space available, try to horizontally bend down the upper part of the bigger Panama x Malawi to avoid it touches the roof of the greenhouse.
Click to expand...

Greetings Dubi, yes. I understand that this is what happened, in any case I found it interesting that one of them advanced more in flowering than the other.

I know it's a complicated question, but can I ask you which of your strains do you consider your favorite in terms of effect?

I wish you all the best for your illnes and that you find your lucky plant!

Mitsuharu said:
I wish you all the best for your illnes and that you find your lucky plant!

No, yo no hablo español. Saludos desde Alemania.

the panama x malawi with higher flowering development seems to be getting closer. I had some problems with caterpillars and whiteflies eradicated with bacillus subtilis for the caterpillars and neem oil for the white flakes, with the humidity some botrytis had developed, but it seems that it is already controlled. The same continues to fatten and produce new pistils 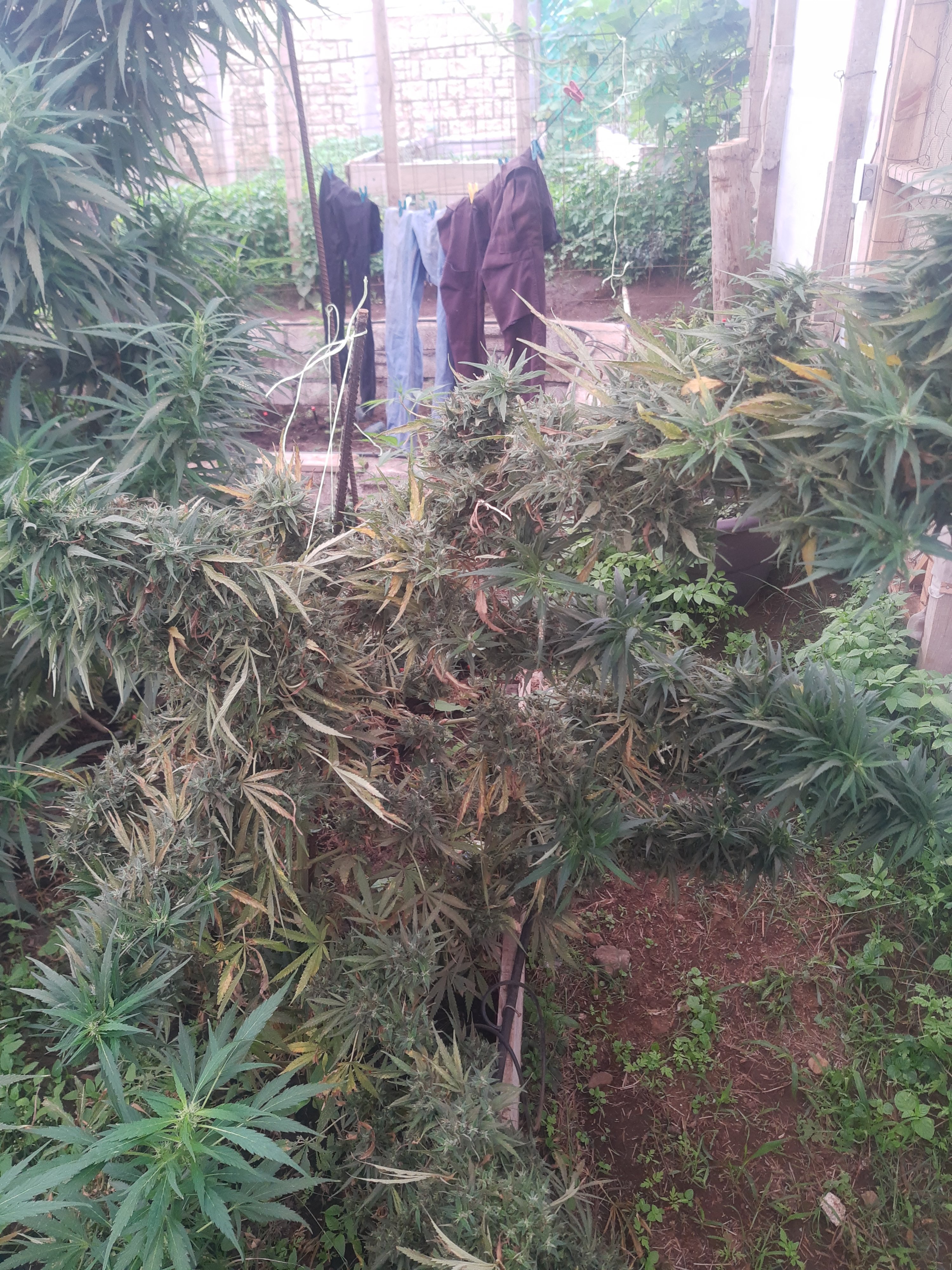 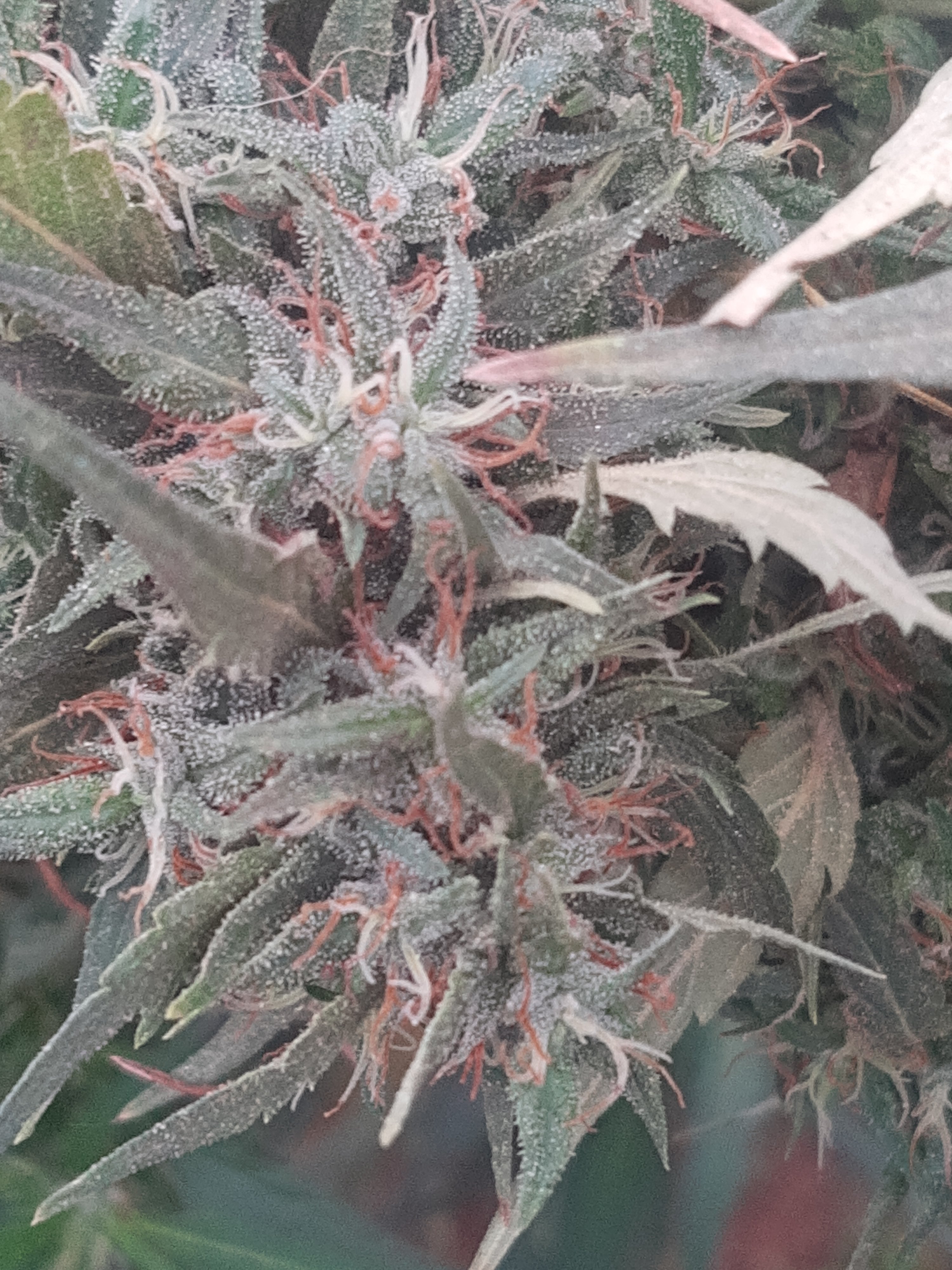 her giant sister has also advanced in flowering, although very slowly. is now more than 3 meters 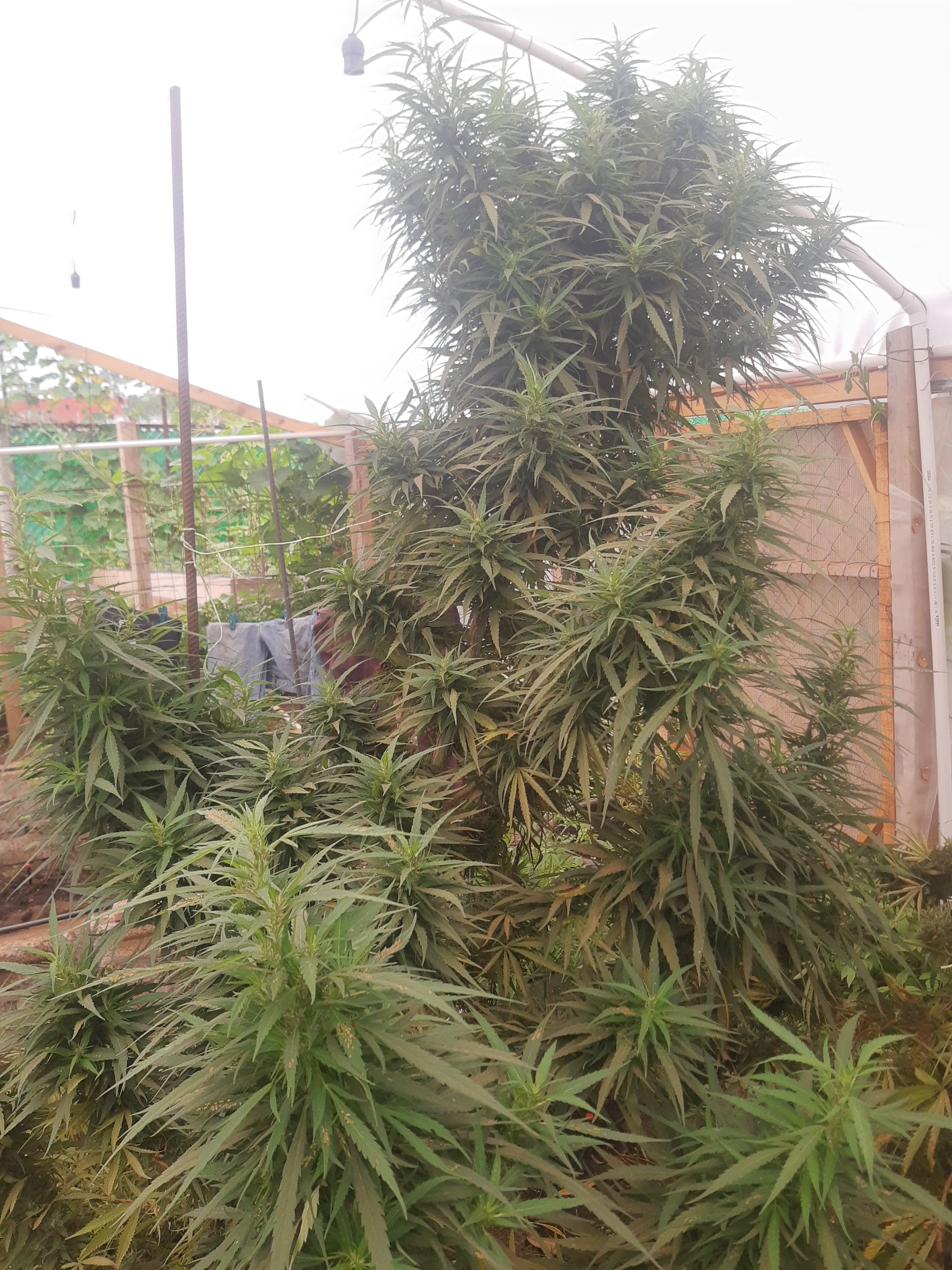 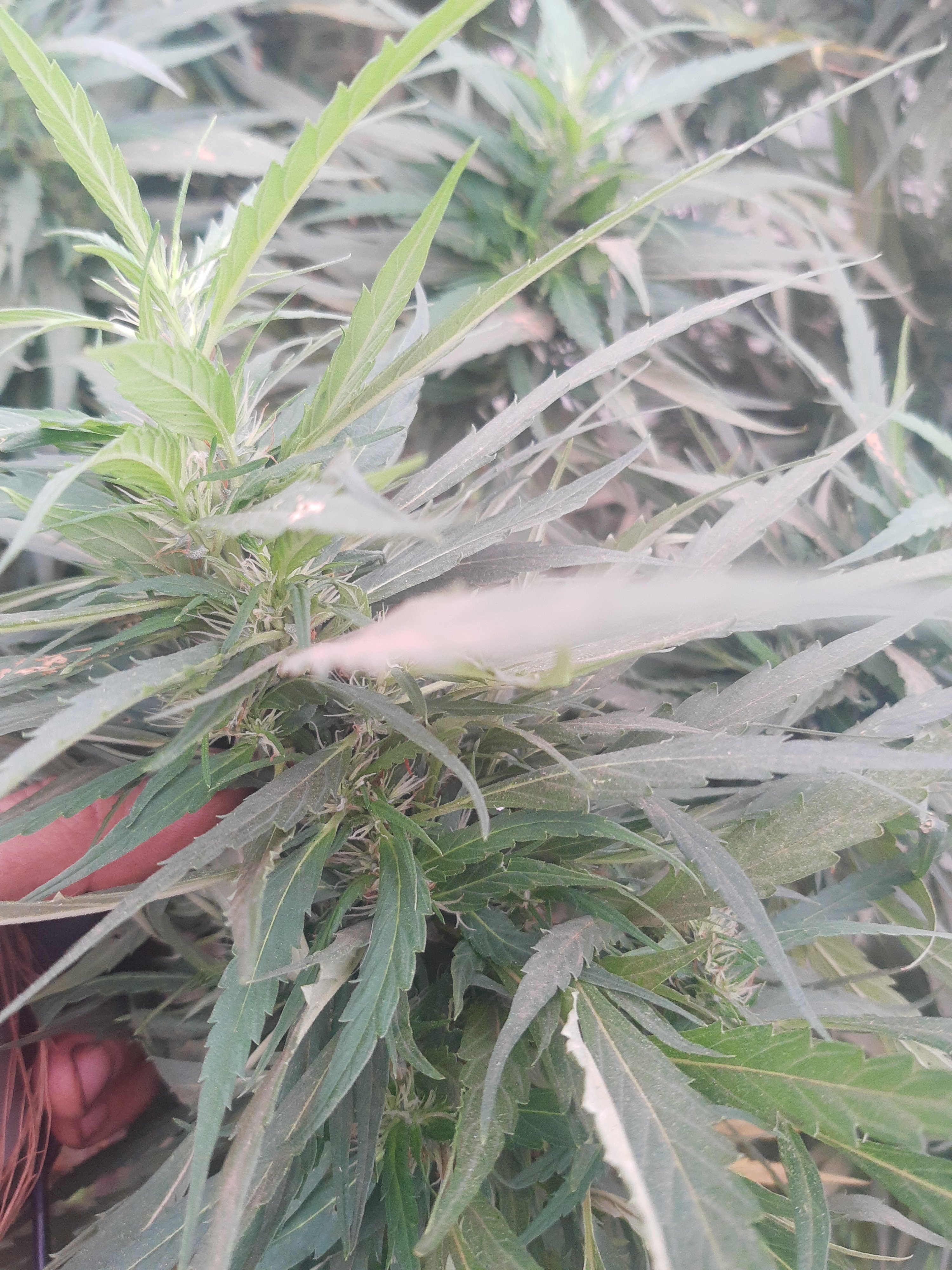 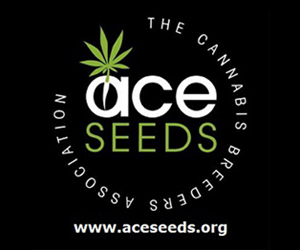