I got a good result with the copper spray.
Y

Ya it worked fairly well for me too
But I don't wanna spray it on my buds I imagine it wouldn't taste too good
Bloody bud!lol
D

It's water soluble. You can wash the buds.

I have used generic garden sulfur powder in veg. Just shake it on and bob's your uncle. Cleared it up and didn't have to reapply.
H

Copper spray is my go to also. I would add that the best time to spray is 2nd - 3rd week in July. You dont see leaf spot yet but its there. I mix liquid copper and Sevin for a two for one spray. I am targeting corn worms and leaf spot. Not saying you can ever get rid of it, at least not in my neck of the woods, but it helps keep it at bay.

Try not to plant near fruit tress like crab apple and other native fruit trees. Leaf spot seems to love them.
H

I wanted to add this method because I think its less toxic method than liquid copper for the native fauna. Liquid coppers are not meant to be sprayed by any water tributaries. Bad for fish.

11-12-2015, 06:48
I thought I would share my experience battling leaf spot in one of my guerrilla spots. I headed out to the patch late august and found out the whole patch had the disease and had to take some serious action to save the crop.
The first thing I did was clear out all lower shoots that were not receiving enough light along with all effected leafs that were showing symptoms. I took extra care and brought a hard tine rake out to the patch to clear out the leaves that had already died and fell off. Leaf spot can be caused by splash-back from rain so it is important to keep the ground around the plants picked up also.
I found two cheap home remedies that I alternated spraying every 3-4 days for at least 3 treatments of each.

2. 2 tsp of baking soda and a few drops of soap as a spreader per gallon of water.

I can tell you that in rotation these two methods stopped all progression of the disease and allowed me to have a bountiful harvest. These sprays work better than liquid copper and are much safer for you. In my next post I will be talking about preventive maintenance I am planning next year including broad spreading a systemic fungicide to the whole area next year before planting. Leaf spot can be a growers worst nightmare since it infects everything around the plants as well. I seen the symptoms on everything from weeds on the ground to wild grape vines and bushes in the area. Leaf spot seems to follow the wet season and spread much more aggressively with heavy rains.

Against mildew, for tomatoes we put a cooper wire in it .

I think it could be done in veg time for cannabis ( but in flower time maybe it will cause too much stress ! ) 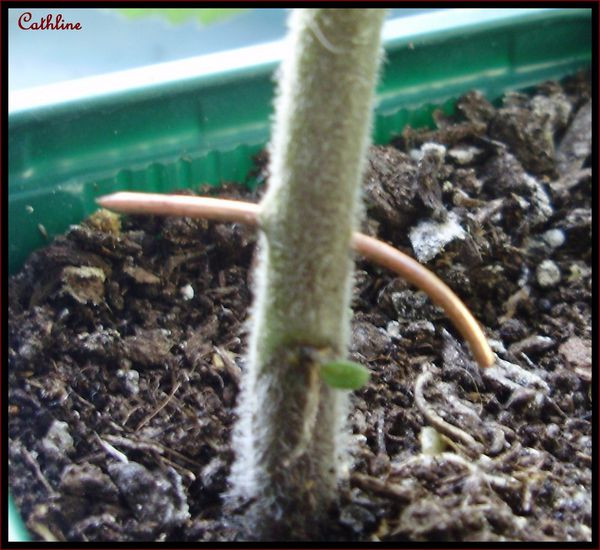 Moderator
Chat Moderator
ICMag Supporter
Wouldn't be easier to just fertigate with a solution containing Cu? Or is this some other kind of action than just providing Cu? Do you know more? Have u done side by side tests? I never heard of this ever, and sure sounds interesting.
H

Against mildew, for tomatoes we put a cooper wire in it .

I think it could be done in veg time for cannabis ( but in flower time maybe it will cause too much stress ! )

Would also like to hear more about your method. Leaf Spot spores can be carried by the wind. "Prolonged wet and humid conditions promote leaf spot disease and most pathogens are spread by wind, splashing rain or irrigation that carry the disease to other leaves."

I don't find some scientifics documentations on internet on it . Maybe this one : Copper wire from late blight on tomatoes: benefits and harms, application features, videos, reviews

If you know some tomatoes growers, ask them if they know this tip .

edit : some poor explanation ( from the above link ):

That is why the use of copper is extremely important in the cultivation of tomatoes. It is used not only as top dressing, but also as an instrument of physical action on phytophthora fungal spores. For this, experienced gardeners use copper wire, piercing the plant stem with it. The circulation of nutrients in the plant occurs from the rhizome to the apex, the internal juice washes the copper wire, and an interaction reaction occurs. High copper photosynthesis effectively counteracts late blight.

Mentor
Using copper wire as a fungicide inserted in the stem is snake oil. That is an interesting method but it's bull shit and has nothing to do with antifungal properties. That method has been around a long time and has been proven ineffective. There are sprays made with copper that have anti-fungal properties and when used as a fungal spray and sprayed on the leaves they work some of the time. The copper sprays are where the copper wire came from but its bull corn.

Mentor
Moldy weed occurs most often when the wrong plant is grown or in the wrong type of environment. It has to do with temperature and humidity and the strain. Fungal diseases can only infect the plant foliage if it's consistently moist during the day or the plant can't transpire correctly. Spacing the plants can reduce humidity around the plants and provide good air circulation. Keeping a drier environment and allowing the soil to dry longer between waterings and removing any excess water out of the grow rooms helps. Overfed plants can cause mold because the thick bud density blocks internal water from escaping out of the stems.

I am a bottom land guerrilla . I grow in wet bottom land areas. There is always the ebb and flow of the seasons with lots of old wet dead plant material around. Don't get me wrong the soil is black gold because of the living soil going on but its rife with leaf spot too.

Severity depends on location and I always have to battle with it in some respect, wet or dry season. I have never had the pleasure of growing somewhere with great air flow and dry conditions.

It seemed like 15 years ago I never saw this shit here in the Midwest then bam! one year it was everywhere. Been here ever since.

Do any other old guerrillas remember it that way?

I am just throwing this out there but my climate has become warmer and wetter here in my little patch of heaven.
Last edited: Jun 5, 2022
S

I wonder if any of my fruit trees died because I didn't use the copper spray.
H

St. Phatty said:
I wonder if any of my fruit trees died because I didn't use the copper spray.
Click to expand...

Phatty
I always see the worst leaf spot damage on the wild fruit trees. Types of crabapples. For some reason the seem particularly susceptible to it.
S

If you're dealing with the "Anthracnose is a fungal infection that causes spots to form on your leaves and is sometimes classified as a type of leaf spot disease." situation ... is it OK to "just let it go" ?

i.e. let it kill some of the fruit trees ?

Admittedly they're not guerilla fruit trees.

One of the local nurseries tries to sell the copper spray ... so far I have resisted buying it.

Figure I'll just put my energy into taking care of the ones that live - though right now I am planting creeping myrtle and lettuce - and watching some Cannabis seeds I planted about 4 days ago.

I've seen it theorized that many fungal issues are caused by calcium deficiency (in turn often casued by excess nitrogen).