So the best "non" DIY solution for odor control i found is an 2200 cfm Silent air box and a 2500 cfm carbon filter (Carboriginal). Not exactly the cheapest solutions out there...but it's better to be safe than sorry i guess. Both of them together cost around 600 euros and the carbon filter needs a service every 12-16 months (replacement of the charcoal).
R

CrushnYuba, it does need an odor neutralizer added to it. That guy on insta that also does landfill work has a couple, the citrus one is not as good as the other non citrus one.

With his neutralizer I could run it at the lowest strength which was half a gal concentrate to 330 gal water. With 14 Baumac fine mist heads I would go through 200 gal in 9 hours running full time at 100 psi.
As far as how well it works, I’d call it 97-100%. All exhaust is being treated from the two exhaust fans, no ridge vents.

I really don’t need to treat air due to neighbors growing full sun plants, just prefer to not give anyone a reason to complain about anything. A few new neighbors, never know who might complain.
Without the exhaust treated I could smell it at neighbors, now I just smell the deodorizer, kind of like smelling the clothes dryer running with dryer sheets in it.

They also do perimeter fogging systems as well as pressurized mist for ridge vents which run the length of the vent.

Bleiweis:ncmenv is the right Instagram name, his website is ncmenvironmentalsolutions.com. He’s not at all inexpensive, but the ideas are pretty basic to copy.
I’m using different deodorizers to save in shipping costs from NCM, but haven’t found one as good or as cheap as his, plus his are tested for safety in different states if licensing was wanted.
C

That's super interesting. Aren't you also in nv co? I know u got somewhat hard well water like me. What r u doing to treat your water to prevent the misters from getting clogged?
R

CrushnYuba, think I might have talked about water with you before, our well tests at 600-750 ppm tds, but also has high chloride in it making it not good for plants and probably misters.

I’m in the foothills so could be similar to what you have. My neighbors all have unlimited well water, don’t think any test it though.

I mix concentrate in with 330 gal water in a tank and route that into the pump and misters.

Water goes from creek to 2,500 gal tank, gravity fed through a string filter into 330 gal tank, then from 330 tank through two different 100 micron filters, one a string type and another a paper type. Then into motor/pump/recirc loop and into misters.

Most systems seem to recommend a single 100 micron filter as enough.

Those Baumac mist heads are the best I’ve found, have a stainless steel lining and a screen to help with clogging. The ultra fine ones seem key to odor control, especially since I am only hitting 100 psi.
N

@CrushnYuba
Regarding the ridge vent slit. Can you recommend any dimensions? Would a 5 inch slit running down the length of a "small" (13ft x 16ft) greenhouse do it?
S CrushnYuba have you ever had the 1 3/8 pipe “taco” on you? Someone was telling me to get 1 5/8 instead because the gh would taco
C

1 5/8 isn't swaged. So the pieces won't fit together. It's also impossible to bend by hand.

I'm not sure what taco is. But the 1 3/8 is plenty strong for greenhouses 20ft wide or less. Even with decent snow load. A 30ft wide house would need bigger pipe.

I have never seen a taco

ICMag Supporter
ICMag Donor
Getting controls set up for this years grow.
Planning on an old iPad in the door for manual control. Zeez said:
Getting controls set up for this years grow.
Planning on an old iPad in the door for manual control.

ICMag Supporter
ICMag Donor
Yup, you're right. That's a mistake. It will be 24v. Thanks.
E

Crushing yuba. For controlling the motors via tinge relay.
What kind of wire are you using to connect polr on the relay? ie 5 to 4 or 8 to 1

Where motor 1 and motor 2’s wire have to come together to connect to a pole, either 5 or 8, is it three wires coming together? Ie motor 1, motor 2, and a wire from pole 5 or 8 all spliced together?
C

einsteinlady said:
Crushing yuba. For controlling the motors via tinge relay.
What kind of wire are you using to connect polr on the relay? ie 5 to 4 or 8 to 1

Where motor 1 and motor 2’s wire have to come together to connect to a pole, either 5 or 8, is it three wires coming together? Ie motor 1, motor 2, and a wire from pole 5 or 8 all spliced together?
Click to expand...

I'm not sure what pin numbers because i don't have a relay in front of me. And your pin numbering may be different then the ones i use.
If you post a picture of the side of the relay you are using with the diagram, i can tell you which pins should be connected. On the output side of the relay I use a jumper to connect the normally open pole 1 to normaly closed pole 2. Normally open pole 2 to normally closed pole 1.
If you post a picture of the socket you put the relay in, i can draw a diagram.

I don't usually do splicing. I use terminals. Splicing 3 wires together is hard and unsightly. I suggest getting a set of terminal blocks to separate the 2 motors.
M

Just bought my bender and getting ready to go get some pipe for a build. Awesome guide bro, thank you for the info.
C 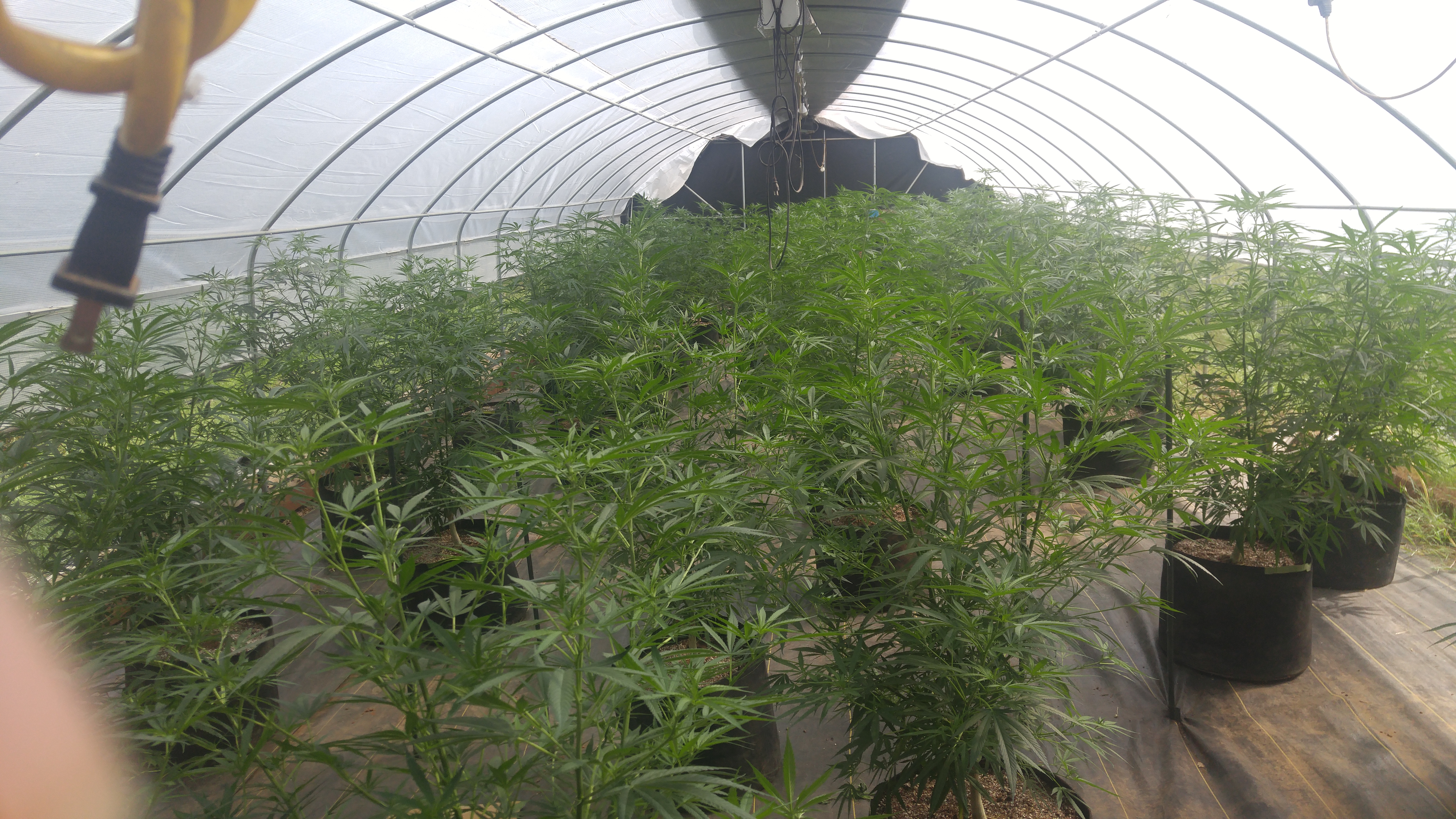 I had 45 plants that i used as mini moms. They just blew up on me. Space is 1200 sqft. They really need more room, but it's what i got available. I was using that greenhouse blacked out as a storage barn for the last few years.
I'm gonna get a run in and then I'm going to turn it back into a barn before the rain comes.

I am debating putting them in bigger pots, but I'll probably just give them hydro nutes 3x a day

ICMag Supporter
ICMag Donor
Looks like you're going to have a full house.
G

Sorry to hijack thread. I thought I read a while back you know of a supplier in Northern California for diy greenhouse kits? I want to ditch pvc/tposts and crap and do a couple of these on my property in Nor Cal valley. Eventually do at least one as a light dep. Thanks
C

Sorry to hijack thread. I thought I read a while back you know of a supplier in Northern California for diy greenhouse kits? I want to ditch pvc/tposts and crap and do a couple of these on my property in Nor Cal valley. Eventually do at least one as a light dep. Thanks
Click to expand...

Its not hijacking. Anything involving building a greenhouse is on topic.

Diy is diy. A kit is a kit. I could sell you a blackout kit that just consists of 2 motors and a controller.